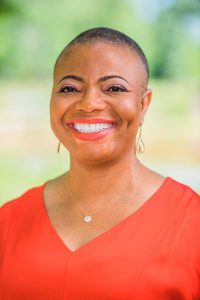 For Doctor Lynda, the pathway to dentistry started during her own childhood experience with a dentist’s impact in her native Nigeria.  As the eldest of nine children (including seven brothers), she witnessed a total transformation in the health of one of her little brothers after his aches and pains were totally resolved under the care of a well-trained dentist.

As a result of this transformative experience, Young Lynda determined to extend that kind of care to others as her life’s calling. She went on to earn her dentistry degree from the University of Benin, her General Practice residency from Howard University Hospital, her Pediatric Dentistry Specialty Training from Children’s National Medical Center, Board Certification from the American Board of Pediatric Dentistry, and her Fellowship Laser Certification from the Academy of Laser Dentistry.

Doctor Lynda has undertaken much continuing education in Orthodontic training and is a fellow of the United States Dental Institute and a member of the prestigious Gnathos education group in Atlanta, Georgia. She holds a certification in Oral Myology from the International Association of Oral Myology (IAOM). She has completed levels 1 and 2 of the Advanced Light force functionals (ALF) therapy, ALF Interface Academy Foundations, Genesis and other courses.

Doctor Lynda is part of an Integrative team of healthcare providers seeking to provide optimal health to our pediatric population by education, awareness, and collaborative care with special interest in infants’ breastfeeding and prevention of sleep apnea in children.

She is a member of numerous professional and civic associations and provides tens of thousands of dollars in pro bono screenings and procedures along with other community service in Northern Virginia every year.

Dr. Lynda could be a child whisperer. Her story starts with her natural empathy as the eldest of nine children, all but one of them (herself and the baby) boys, and leads to her emergence as one of the leading practitioners of integrative functional holistic pediatric dentistry in the Washington-Baltimore metropolitan area, home to nearly nine million people.

“I am blessed to have six brothers and my only sister alive,” Lynda says. “And growing up, I always knew I wanted to be a doctor. I believe it had to do with having to take care of many siblings and wanting to show a good example for them to follow.”

In Eastern Nigeria, it was not very common to want to be a dentist, certainly among women, who tended to embrace traditional roles in the household when Lynda was a girl. But when Lynda was only 8 years old and watched as her baby brother grappled with a severe toothache, a powerful drive grew within her.

“For many nights, I had to carry him and pace the floor, as he could not sleep due to pain,” she recalls. “When we finally got to the dental office, as soon as the tooth was taken out, he became a different human being.”

The boy had just seen a dentist who seemed to have worked magic.

“I asked the doctor, ‘What do you need to do to be this kind of doctor?’”

The dentist was a female expatriate from Europe. Sensing from the big sister’s obvious amazement that Lynda was interested in the profession, she advised young Lynda that it was a very difficult and tedious profession for a young lady.

From Dental school to America

“Dental school training at home was very rigorous and competitive because there were very few dental schools,” she explains. “And because you could be the only ‘doctor’ within a fifty-mile radius of the community, you were trained to know how to take care of a whole person in addition to the dental-school requirements to graduate.”

Lots of learning had to take place just to get through professional school, but Lynda was determined to graduate as a dental surgeon from medical college. She completed what, in the States, would be called the Doctor of Dental Surgery (D.D.S.) degree in February 1987, at the top of her class.

Once in dental school, she learned that dental issues like her brother’s could have been prevented, not merely alleviated. Following the wisdom that “an ounce of prevention is worth a pound of cure,” she decided to pursue a practice based on proactive prevention, starting in patients’ childhood.

Pathway to Specialization in Prevention

“There are different aspects of a kid’s health that can benefit when we take care of their oral health such as sleep, breathing/airway, asthma, ADHD, social interactions, learning and behavioral challenges,” explains the mother of two. “Their oral health affects their self-esteem, and how they interact with others more than people realize.”

When kids have issues with their oral health, such as pain, they shut down emotionally, can’t eat well, and don’t smile, and their personality is different. When they are not comfortable, they are lethargic, looking as tired and worn down as they feel. When their oral health is optimal, they can eat better, their faces are lively, and they can fully express themselves.

“There are a lot that is great about our conventional healthcare system and a lot more that can be improved with holistic preventive measures,” Lynda says. “In my field, I get to maintain and enhance vitality for people from the earliest ages.”

Lynda transitioned into a sub-specialty after opening her general children’s dentistry in Ashburn back in 2000. She began to focus more fundamentally on integrative functional holistic pediatric dentistry, or IFHP, which, she says, is “the concept of whole body and total wellness and was always primary in my practice in addition to proactive prevention.”

Her own medical history informed the recent devotion to IFHP and service to other families.

“Several years ago, I could not recover from bronchitis and went from doctor to doctor, was wrongfully diagnosed and treated for Lyme disease,” she says. “I was not getting better, until I was finally correctly diagnosed with sleep Apnea. Looking back, the signs and symptoms had been there but were missed for many years. For instance, I have been an open mouth breather for as long as I recall. Even as a dental health expert, I did not know the impact of open mouth breathing on one’s health, especially on a growing child.”

That breathing pattern can cause pressure on the tongue, which can obstruct the airway and lead to interrupted sleep. “The realization that intense diagnostics and oral-systems evaluation could promote overall health compelled me to convert my entire practice into IFHP,” she says.

Now, after more than 20 years of research, training, and dental practice serving scores of children and young adults, Lynda says she is able to help youngsters “get the light back in their eyes, lose the labels of ADHD, improve their Vanderbilt Assessment Scores, and more.”

“Moms breastfeed without pain because of our integrative functional holistic approach to identifying root causes, such as removing obstacles utilizing 3D imaging, lasers and other advanced technology,” she says. “Our families are suddenly becoming who they were meant to be and fully expressed.”

She says that her practice’s holistic and integrative approach gives patients the unique opportunity to thrive intellectually and physically.

“I believe children are our future,” Lynda concludes. “Many issues affecting them are preventable, and many people are not educated about it. Because children often do not complain, it is up to us as parents to observe and follow up with a trusted functional integrative holistic pediatric provider to help them thrive.”